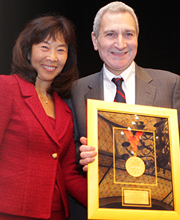 Congratulations to Dr. Vincent J. Iacono on receiving the American Academy of Periodontology’s Gold Medal, the highest honor of the Academy!

The award was presented at a ceremony during the American Academy of Periodontology’s 2015 Annual Meeting in Orlando Florida.

Gold Medal Award: First conferred in 1967, the Gold Medal is the highest honor of the Academy. It is presented each year to a periodontist who has made outstanding contributions to the specialty through service and an understanding of the study, diagnosis, and treatment of periodontal diseases.