On April 11 an Inaugural Dinner Gala was held in the Student Activities Center to celebrate the newly established Stony Brook University Chapter of the National Academy of Inventors (SBU-NAI). 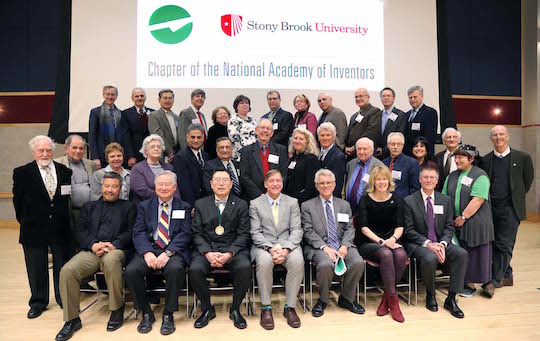 April 2016-Thirty Stony Brook faculty members — all of whom hold patents issued by the U.S. Patent and Trademark Office — were inducted as inaugural members to the SBU-NAI. Their inventions cross into many scientific fields, such as chemistry, biomedical engineering, computer science, pharmacological science and mechanical engineering.

Distinguished Professor of Chemistry Iwao Ojima, NAI fellow and Stony Brook Chapter President, and Director of Technology Licensing and Industry Relations Peter Donnelly, Executive Director of the Stony Brook Chapter, discussed the importance of having an NAI chapter on campus to help build the research enterprise leading to marketable inventions.

“The Stony Brook University chapter of the National Academy of Inventors is very crucial for this University,” commented Professor Ojima. “It will bolster the importance of our scientist-inventors and also cultivate next-generation scientists who have new inventions in mind.”

“In terms of moving forward with commercialization, the faculty play a critical role there,” added Donnelly. “They are the world’s leading experts in their fields and in their inventions, and typically a company will want that expertise on hand as they move forward with product development and investment.”

The SBU-NAI will foster research that leads to academic inventions and entrepreneurship from faculty and students. The chapter will also help build a culture of invention across all campus disciplines and, as Professor Ojima stated, cultivate the next generation of academic inventors.

There are more than 200 university and research institution NAI chapters in the U.S. and around the world. The NAI-SBU chapter is open to all members of the University community who have received an issued patent from the USPTO.